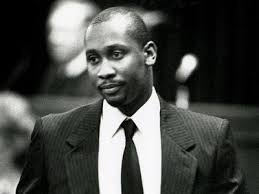 Today, an Innocent man was killed.

11:08pm Eastern Time, Troy Davis was murdered by lethal injection. I specifically use the word, murder for two reasons– “homicide” is listed under “cause of death” for Davis’ death certificate, and because the death of an innocent man can never come shorter than murder.

The Supreme Court rejected Davis’ defense team’s last minute appeal to grant Davis a stay of his execution. He was executed 4 hours later then was scheduled, leading his supporters to believe that his execution had been stopped.

Davis’ last meal was a cheeseburger, mashed potatoes, a cookie, and grape juice. His last words were to declare that he is innocent, and to encourage people to continue fighting for his innocence after his death, to find the real killer.

Troy Davis was blocked from having a polygraph test before his execution, a final show believed by many that would have proven his innocence, one last time.

Before Davis was convicted of murder, he already had three strikes against him: He’s a black male. He was charged with killing a police officer. He lives in Georgia.

There are flaws with the death penalty system–Many innocent men no doubtedly are put on death row, but the difference, what makes the case of Troy Davis unique is that this is the case that we know he is innocent–That if he was trialed today, the jury would most likely rule him an innocent man. 4 of the jurors on his case know they would.

It has only been a few hours since Davis’ execution, who knows what the outcomes could be tomorrow and the days to follow. Will there be a riot, a revolution? Is Troy Davis’ execution enough to phase people to start asking questions of the government, of our flawed court system that will allow Casey Anthony to be free while Troy Davis is executed? The same court system that 19 years ago released the men who beat up Rodney King, which had been filmed. 7/9 of the witnesses recanted their testimonies saying they claimed Davis had shot Officer Macphail because they were pressured, and intimidated to by the police. One of the two witnesses left is believed to be the actual killer himself. No physical evidence. Any man trialed under the American court system is to be trialed innocent if there is any reasonable doubt. The case with Troy Davis moves from beyond “reasonable doubt”, to too much doubt. Tonight we are reminded that the US is not a perfect country, and that as its citizens, we must continue to stand up for the injustice–especially the social injustices that persists.

I implore that everyone pray for the Davis family tonight, and follow what Davis had asked of his interns on his human rights campaign–To not stop the fight with his death, to fight injustice around the world no matter how small or big it may be.

‎”The struggle for justice doesn’t end with me. This struggle is for all the Troy Davises who came before me and all the ones who will come after me. I’m in good spirits and I’m prayerful and at peace.” -Troy Davis